Many years ago when I performed a juggling show round the world, I heard rumours of a South Pacific island where all the women were jugglers of exceptional skill. Initially, I considered the story to be a kind of urban legend amongst the juggling diaspora, but the exoticism and allure of the idea of Pacific islands inhabited by juggling women remained with me.

“According to the Guinness Book of Records, the 8-ball shower by Bruce Sarafian (USA) is the world’s best ever performance. But the rightful holders of all the ball-showering records are probably the juggling women of Polynesia.”
— “Fuofua kau moua” by Wolfgang Schebeczek, in Kaskade, Vol. 51

In 1993, I happened to be travelling from New Zealand across the Pacific to California. I stopped off in Fiji to juggle with my hands on either side of the dateline, which cuts directly through the south western part of the island of Taveuni.

Unless you’ve had to deal with the effects of the dateline directly, it’s rather difficult to grasp the implications of it. In the picture above, I’m juggling with one hand in yesterday and one hand in tomorrow — although in practice (of course) the island maintains one timezone across its entirety.

It still strikes me as the most amazing coincidence that because the Prime Meridian was defined as running North-South through Greenwich in London, that the confusion of the dateline is only felt in the Pacific Ocean. Imagine if the Prime Meridian had been defined in Moscow, Beijing or Washington. The dateline would have run through a major landmass on the other side of the planet — with the potential for enormous confusion wherever that might have been.

A: When do you want to meet?
B: Oh, how about yesterday?
A: Okay, about 3pm under the clocktower?
B: Sure thing — see you back then.

Tonga itself actually lies east of the 180th Meridian, but west of the dateline which makes a large detour around the archipelago. Time confusion aside, I decided that, being so close to the island kingdom, I couldn’t miss the opportunity to investigate the reports that I’d heard — and discovered that they had indeed been more accurate than I’d believed.

Flying in to Tonga has been known to make even the most seasoned of scuba divers salivate — I heard gasps from fellow passengers as we flew in over its reefs and lagoons. I was planning to spend two months in the Ha’apai archipelago, staying with a family who run a guest house there.

My search for juggling women on the island was made simple when it turned out that the daughters of the family could all juggle. Paia, the eldest, showed me just how accomplished she was by picking up six of my juggling balls and instantly launching into a sustained six-ball shower pattern.

Paia considered me quite eccentric when I showed her the cascade (figure-of-eight) pattern which is the most common one that people learn throughout the world. It was cheating, she said. And so there was no choice but to spend many an afternoon engaged in ball-showering endurance contests with her — much to the amusement of the local boys, who also thought me rather eccentric because they had never seen a man juggle before.

While they juggle, the women sing a traditional song — the first line of which is “Fuofua kau moua”, as in the title of the Kaskade article. The women said that it was a “counting song”, that a person starts singing it when they start juggling and that the time for which they juggled is marked by the number of repetitions of the song plus the word they were singing at the point at which they dropped a ball. You can hear the counting song sung by the Queen Salote Choir using the player below:

The words of the song are archaic, and the meaning of the words themselves have been lost over time. I wondered if anyone might know (if only vaguely) what the lyrics meant, so I asked around. People told me that the lyrics was a mixture of ancient Tongan, Fijian and Rotuman languages and that there would be very few people who would know what the words might mean. I guessed that the meaninglessness of the lyrics might actually be an important part of the song’s function and account for its continued usage — helping the juggler enter the trance state in which they juggle at their best.

There are a multitude of myths surrounding juggling in Tonga. I was, for example, told of the legend of Hikuleo, the goddess of the underworld, who snatched those who approached without authorisation, plucked out their eyes, and juggled with them. I resolved to steer well clear of the underworld (whether invited or not) for the duration of my stay.

The legend also reminded me of a story I’d heard about the “Friendly Islands” — as Tonga was dubbed by Captain Cook when he first arrived. Apparently, he and his crew had been earmarked as dinner by the locals, but two rival chiefs had argued over the menu and Cook and his crew left fed and watered and thinking the islanders most hospitable. How deceptive appearances can be.

Throwing games also feature as a mechanism for teaching children about the ancestors, and as courtship rituals. I was told anecdotally that the best juggler — the one who could juggle for longest with the most balls — became one of the most eligible women in the islands and had excellent marriage prospects as a result.

I also found out that separate island groups had developed different juggling skills. In the more northerly Vava’u group, fire swinging (of the kind practiced with pois by New Zealand Maoris) is favoured over the ball-showering technique found in the rest of Tonga. In Fiji and Samoa, however, it is staff swinging that is more popular and is more of a male pastime.

Sadly, I also found that the juggling tradition was being rapidly eroded by more contemporary games such as netball, as well as new pastimes like watching TV. The younger girls were much less likely to be able to juggle than their elders. It’s a great shame that there are so few records of such an extraordinary aspect of the art of juggling.

This entry is a rewrite of an obsolete page which used to be at
http://www.flowmotion.demon.co.uk/playground/hiko/
I’ve included the address above because I found people still referencing it, and hopefully it’ll point them to this entry instead. After a long hiatus, finally a new post on my blog. And why? Well, because I’ve just made the new version of CommentPress public. Nothing to do now but wait for feedback — oh, and make a start some of the enhancements I’ve got in mind.

The latest project that I’ve done with Futurelab has kept up the tradition of being nominated for a New Statesman New Media award. Congratulations to the team on the nomination and commiserations that it didn’t win the award this year.

April fool’s day is, it seems, confusing for some. In my morning trawl around the net newswires, I kept seeing comments from people who were unsure as to the veracity of the stories that were being posted online today — and bemoaning the fact that this was how they felt.

It occurred to me that this was actually a Good Thing and that perhaps a campaign should be started to make every day a day when jokes can be played before midday, thus reducing the gullibility quotient of the population in one fell swoop.

Talking of swoops, my favourite prank today has to be the BBC’s flying penguins advert for their iPlayer. I hope they leave it up beyond the next six days.

Another installment of Izzy’s creativity. Last time it was stop-frame animation. This time it consists of taking one of Stephen Appleby’s superb cartoons literally… What she wanted, though, was to tell some stories about the adventures of Monster Potatohead — or “Bob” as he’s been officially named. Here he is with Izzy and a puppy on a farm in West Bengal, India: I look forward to the further adventures – perhaps he’ll meet Mighty Mouse in another animated spectacular sometime. Roll on another wet weekend… 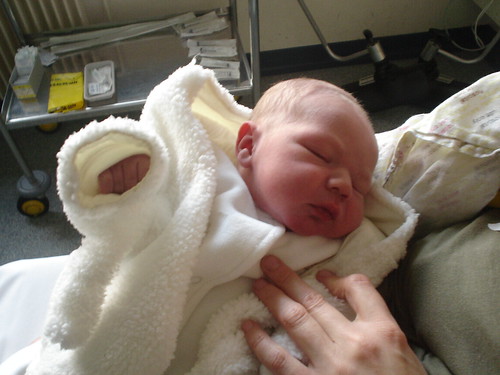 On a recent trip to Peru, I thought it somewhat alarming that every hotel we stayed in had signs just like the one above — but now I know that they were deadly serious. I’d never heard of them until I stumbled upon this BBC report, but kudos to Telecoms Sans Frontieres who do a job that’s often overlooked in the news media’s obsession with more grisly details.

Congratulations to the Create-a-scape team on the announcement of their nomination in this year’s New Statesman New Media Awards. They’ve been selected as finalists in the education category which apparently “go to the body or project that has made the most significant contribution to education through the use of new media technology.”

I worked with them on the support website for the project and through that have read most of the support material for it. I reckon they’d be deserving winners. It’s an excellent and innovative idea and I hope it goes far — good luck folks!

Go on, you know you want to swap a car trip for something better — walk, cycle, hang-glide, whatever — perhaps even work from home for the day if your employer will let you. Whatever you do, register it on the site I just built with the chaps at Tijuana Design: